From Mexican director Amat Escalante, The Untamed stars Ruth Ramos, Jesus Meza and Kenny Johnston. From the trailer, it looks as though they have their work cut out for them, but they deliver committed and striking performances that heighten the mystery and emphasise the film’s concern with the downright weird. Remind yourself of the trailer below. 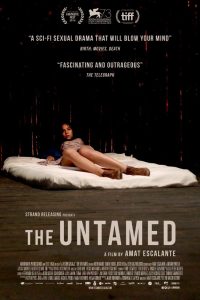 Synopsis:
Alejandra is a housewife, raising two boys with husband Angel in a small city. Her brother Fabian works as a nurse in a local hospital. Their provincial lives are upset with the arrival of the mysterious Veronica. Sex and love can be fragile in certain regions where strong family values, hypocrisy, homophobia, and male chauvinism exist. Veronica convinces them that in the nearby woods, inside an isolated cabin, dwells something not of this world that could be the answer to all of their problems. Something whose force they cannot resist and with whom they must make peace or suffer its wrath.

The blend of sci-fi, sex and horror makes for a wonderfully Lovecraftian experience, so we are extremely excited to get our hands on The Untamed in the next few weeks.

The Untamed will be released in the UK courtesy of Arrow Video in cinemas on 18th August, before a Blu-ray and DVD release on 25th September.