PENNYWISE IS BACK IN FIRST IT: CHAPTER TWO TRAILER 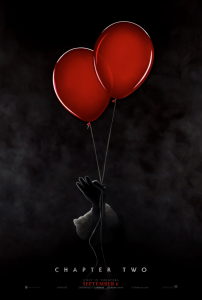 Warner Bros just released the first teaser trailer for It: Chapter Two, and the Loser’s Club is officially back in session.

In the teaser, we see the now-adult Beverly Marsh (Jessica Chastain) visiting her childhood home to confront her demons. But the seemingly kindly old woman who now lives there may not be what she seems… and apparently isn’t keen on keeping her clothes on.

The trailer also sees Bill Denbrough (James McAvoy) being taunted by visions of Georgie hanging out in the sewer grate, and Richie Tozier (Bill Hader) spotting our favourite killer clown floating Mary Poppins-style over the town’s Paul Bunyan statue. There’s a creepy shot depicting hundreds of balloons floating under the Derry Bridge, which likely heralds the hate-crime-turned-clown-attack death of Adrian Mellon (Xavier Dolan), and we even get a brief glimpse of the Loser’s Club performing the Ritual of Chud to banish the evil from Derry once and for all.

Andy Muschietti returns to direct the sequel, with Bill Skarsgård reprising the role of Pennywise the Dancing Clown. Isaiah Mustafa, Jay Ryan, James Ransone, and Andy Bean round out the adult cast of the Loser’s Club.

You’ll float too when It: Chapter Two hits theatres on September 6th. Descend into the sewers with the trailer below.