Payback is a Mother in the Poster for Breaking In 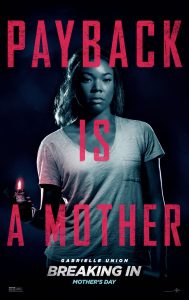 A new poster has been unveiled for Breaking In, a revenge thriller that follows a mother who will stop at nothing to protect her children during a home invasion. It sounds a bit like the Halle Berry-starrer Kidnap, mixed the first Purge film and Panic Room; which could be the perfect recipe for an intense and suspense-filled thriller.

The poster isn’t particularly inspiring as it boasts the classic large-lettered titling, but we hope the film will provide a little more creativity and flair.

It’s the perfect film poster to coincide with Mother’s Day; showcasing the strength and determination of a mother as she strives to protect and save her children. The film stars Gabrielle Union, as was Billy Burke, Richard Cabral, Ajiona Alexus and Levi Meaden. V For Vendetta, Survivor and Sense8 director James McTeigue is at the helm and he directs a script written by The Commuter and Rampage scribe Ryan Engle.

Breaking In will be released on 11th May.