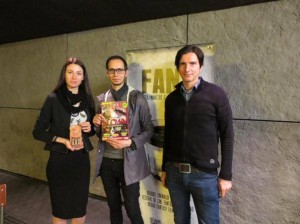 First emerging on the scene as one half of the Russian electronic music project Moonbeam alongside his brother Vitaly, Pavel Khvaleev also took it upon himself to create his own music videos. After shooting and editing more than 40 videos he took a leap of faith to shoot his first feature-length movie, the dramatic piece Random. Whilst horror is generally neither the done nor appreciated thing in Russia, a German genre movie distributor was so impressed by Khvaleev’s debut feature that they were keen to see if he could come up with a horror film bearing similar qualities. Laying down the gauntlet, Khvaleev banded with eight friends to self-finance III, written by his wife Aleksandra Khvaleeva and – despite such a tight budget and tiny skeleton crew – they achieved something that looks like a million dollars and is overwhelming festivals the world around.

SCREAM’s Howard Gorman caught up with Pavel Khvaleev, scribe Aleksandra Khvaleeva and the film’s producer Frank Ellrich at this year’s recent Fant Bilbao Film Festival to find out just how they managed to create such an aesthetically stunning cinematic experience on a shoestring budget…

SCREAM: So Pavel, tell us a little about how you started out as a musician and how shooting music videos led you to where you are today, making feature-length movies.

Pavel Khvaleev: I am a member of the Russian electronic project called Moonbeam and we started out around eleven years. After about seven years we started thinking about how we could do our own music videos and step by step I started learning how to shoot them. If you watch our music videos you’ll see that they usually take the form of short stories as I wanted to provide something much deeper than just moving images to accompany our music. We made clips for our own tracks first and then later did some things for Frank Ellrich who is with the music project A*S*Y*S. We met each other about 4 or 5 years ago by chance and he asked me to come up with some material for him.

Frank Ellrich: It’s a funny story actually. We just happened to be sitting next to each other on a plane and he was working hard on his laptop. I just asked him what he was doing and he told me he was creating his new video clip. It was absolutely amazing and it looked so professional and I was really amazed that he created his own videos. As soon as I saw how much he knew about video creation I straight away told him I thought he would be perfect to create a music video for me. He accepted to do a music video for me and we built up a close friendship and then we moved on to what we are doing now which is the movie III.

PK: Yeah, the first feature-length film I did was with another friend, Igor (Preobrazhenskiy), which was a drama and it wasn’t as professional as III but it was such a great experience. After we’d made that I took the movie to Germany and showed it to Frank and he showed it to some people he knew.

FE: I had a connection with a distribution company called interGROOVE who had all the big underground labels like Cocoon Recordings and things like that. When the vinyl distribution industry died they tried to find new fields for distribution so they started distributing DVDs and movies. I showed them Pavel’s first film, Random, and they said they really liked the quality of it but they were more focused on the horror genre so they said that if Pavel was interested in making a horror movie then they would be very interested.

PK: When Frank told me this I thought why not, for a couple of reasons. Firstly, there’s no one doing anything like this in Russia and we also felt that some of our music videos already had this kind of horror element in them so it would work out. So Aleksandra, who is also a musician, wrote a short synopsis for an original idea that was about Adam and Eve and about their heritage. 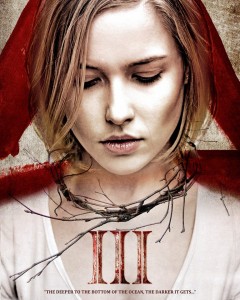 FE: They were thinking along the lines of the idea that if Adam and Eve really existed there must be some people who are more closely related to the source. That was the first outline but as you have seen it changed a lot from there.

Even though the film doesn’t deal with that subject in the end there are a lot of religious references in the film so what made you decide to write a film covering those aspects Aleksandra?

PK: In fact, at the beginning of the 20th century, catholicism and shamanism were actually really closely related.

And did you prefer to show Pavel your draft only when it was finished or did you often go to him with a few pages to see what he thought of it?

AK: First of all I wrote an outline of the whole thing that was about six pages long and I showed that to Pavel to see what he though of it.

PK: After that, once into the full writing process, we would discuss it over breakfast or whatever just to decide which bits might need tweaking.

AK: Ideas come when you least expect them: during breakfast, in the bathroom, whilst you are sat on the toilet. [laughs]

FE: But in answer to your question, they did a draft and discussed it and then they showed it to some friends who had more experience in this kind of thing.

The aesthetics are just so amazing for such a low budget film. I’m guessing a lot of this was created in the editing room but how did you manage to pull it off because it really does look like it cost you millions to create?

PK: What was important for us was to find the best locations first where we would be able to use the natural features rather than having to use technology. A good example is the desert scene towards the end of the film. This is a special place in Russia where there are just machines there digging up the earth and if you see the raw footage we shot you can see a load of machinery off to the sides. In the post production we had to delete all of that stuff and I was in post-production for about 6 months to do all that needed doing.

FK: Also some parts of it were shot in Germany in Marburg, which is a modern city, so he had to erase all the modern stuff there to make the film look and feel authentic. For me it is great to get to speak to the press like you because I can’t even begin to describe how amazed and pleased I am with how Pavel and his tiny crew of 8 people were able to create this film.

AK: And one of the crew, Evgenia Zakharova, began to learn special effects makeup specifically for the film. Before then she had never had any experience doing anything like that.

PK: She’s amazingly talented and she even did this for me: 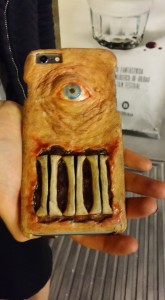 PK: In the case of the main actors, Polina Davydova and Evgeniy Gagarin, whilst they aren’t professional I really think they have a lot of talent. I really believe that if they carry on in this trade and keep at it they could go really far. Also Luba Ignatushko, who plays the younger daughter, she went to acting school for roughly three months to prepare for the role.

Obviously you are still promoting III right now but has the film been picked up and what are your plans for the future?

FE: In Russia the distribution is currently a work in progress but we have distribution in Germany and also in Holland. We also have a UK sales agent, One Eyed Films, who approached us very soon after the first festival screening confirmation.

PK: In terms of the future, we think we have a really awesome concept. It still has an element of horror but it’s more of a thriller.

AK: But with more blood this time!!!

PK: Personally, I like my horror films to have a lot less splatter in them but my wife here really loves The Human Centipede. But our next story is definitely going to be something that we hope really gets the audience’s brain cells working overtime…

Thank you so much to the three of you for speaking to us and I wish you all the best with the film and your upcoming festivals.

It’s been an absolute pleasure Howard. Thank you so much for your support.

We’d like to thank all three for speaking to SCREAM about III and we’ll leave you with a salute from the trio as well as the trailer so you can appreciate just what a stunning piece of work they have managed to achieve: