The Passengers Trailer Has Time to Kill 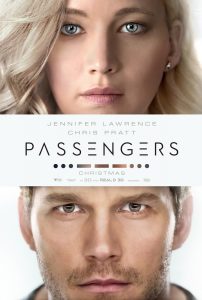 The first trailer has been unleashed for Morten Tyldum’s (Headhunters, The Imitation Game) Passengers that stars Jennifer Lawrence and Chris Pratt. The film sees the two wake from hyper-sleep 90 years early while on a spacecraft to a distant planet. In short, it sounds like a complete nightmare.

The trailer shows the pair with plenty of time to kill and getting to know each other, before they realise they may have been selected to wake early for a reason. There are explosions, intensity and a bartender played by Michael Sheen that looks remarkably similar to Lloyd the Bartender from The Shining.

Synopsis:
On a routine journey through space to a new home, two passengers, sleeping in suspended animation, are awakened 90 years too early when their ship malfunctions. As Jim and Aurora face living the rest of their lives on board, with every luxury they could ever ask for, they begin to fall for each other, unable to deny their intense attraction… until they discover the ship is in grave danger. With the lives of 5000 sleeping passengers at stake, only Jim and Aurora can save them all.

Check out the trailer below and be sure to catch Passengers when it is released in the USA on 21st December and in the UK on 23rd December.