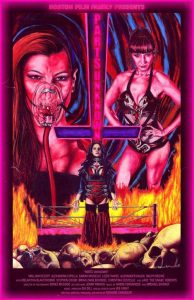 It’s probably fair to say you won’t be seeing another film anytime soon that opens with a punishingly lengthy scene of a poorly-staged wrestling match set to horrible, pulsating techno. But then, you’re unlikely to see one that has much at all in common with Parts Unknown, the latest from micro budget horror stalwart Rick Chandler. Whether or not that feels like a good thing however, switches frequently throughout the film’s unnecessarily long runtime.

From the off, Chandler chucks all kinds of visual reference points into the mix – grindhousey ‘Our Feature Presentation’ title card, full-on ‘80s neon opening titles – and takes the same tack with his plotting, which sees the narrative walking some really weird avenues. The fucked up ‘family’ of wrestlers and ex-wrestlers at its centre (made up of commanding big brother Hermann, simpering manchild Harvey, once-famous nutjob Kitty, pretty-boy outsider Karl and Kitty’s best friend/worst enemy Lacey) talk frequently about reviving their flagging wrestling careers but spend their time filling themselves with drugs and roaring at each other. Harvey accidentally kills a cop, Karl shoots himself in the head (and begins to slowly and inexplicably melt away in the house), Hermann takes poor Harv to the swamp to bury the officer’s body and then things get mighty odd. The cop comes back to life, becoming an unkillable, sort of spirit of love bent on revenge; Hermann meets a hooded, lizard-faced demon that looks like a primary school art project and demands blood sacrifices and Lacey is mutilated by Kitty and takes to carrying around breathing apparatus as she lures men to the slaughter to appease the swamp demon.

The first act of Parts Unknown is a bit of a chore, its low, low budget showing at every turn. Scenes of mostly throwaway dialogue go on too long, shouting and screaming poses as drama and the whole exploitation throwback thing inferred with the opening titles doesn’t really come off. Once the film starts to really push its own boundaries however, it becomes far more difficult to pass off. The bloodshed, while wholly (if knowingly) unconvincing, has a go-for-broke sickness that brings to mind the likes of Dear God No! or Hobo with a Shotgun. The film’s admirable dedication to the bizarre and excessive in fact, makes it easy to forgive its shortcomings. Kitty’s boggle-eyed psychosis is initially grating as hell, but fully justifies itself during a wrestling match with Lacey (in a shitty underground club, to a baying crowd of oooh, about 12), the scene plunging to filthy depths with a sicko gore effect that challenges even Violent Shit for sheer cheapness. More annoying than Kitty is Harvey’s sobbing and cowering but then, during a face-off with the now-undead cop, he suddenly becomes the comedy centrepiece of the whole film.

Talking of comedy, the film is filled with strange, twisted humour, although it may take some time to realise it. And as with many other aspects of the film, it’s impossible to know just what’s deliberate and what is not. Absurdly fake violence and irritating characters give way to some cool visual ideas, such as Lacey being aggressively sexual towards a Tinder date while wearing a cowboy hat and huffing from her oxygen tank, or the festering, fizzing corpse of Karl just taking up space in the central family’s living room. 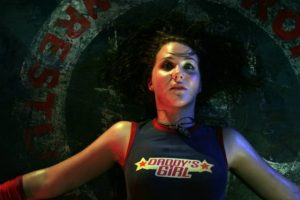 At just under two hours, Parts Unknown would benefit from some serious trimming and tightening. Certain sequences are just too cheap and dragging to invest in, but will often be followed with moments that force you to sit up and re-evaluate. With a plot taking in wrestling, demons, revenge, family feuds and a potential apocalypse, Parts Unknown undoubtedly has bags of ambition, even if it doesn’t all make it to the screen.