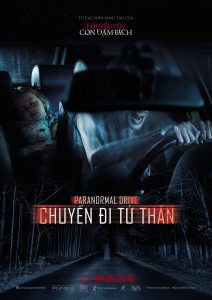 Synopsis:
A newly purchased car starts to elicit strange behaviours, leading its owners to think that something supernatural may be tied to the vehicle.

Paranormal Drive caught my attention because it was described as “Christine in Moscow”. I love Christine. I do not love Paranormal Drive. It would be safe to say that this is probably one of the worst horror films I have ever seen and I have seen a lot of shitty horror films. Devoid of any scares, coherence or intelligence, Paranormal Drive is a dreary mess and a slog to get through.

The premise of the film is yawn-inducing, following a couple in a troubled relationship who take a trip to figure out their issues. They purchase a new BMW, which is haunted – oops! – by the ghost of a woman who met her end at the hands of a violent husband. Her body was left in this BMW for 8 days, so now she haunts it. Obviously. What ensues is a journey through every horror cliché in the book – from averagely CGI-ed ghostly figures in the rear view mirror to mysterious injuries and unexplainable noises, Paranormal Drive hits every scary stop on its hellish journey. It is a chore to watch the events unfold, because they are predictable, dull and in the end, aggravating. You’ll be begging the film to take a surprising direction, to turn around and start again. Anything, to stop it on its non-stop road into the inevitable. Alas, your wish will not be granted because Paranormal Drive plays its entire runtime on the safe side and never dares to steer into the unknown. With a little more courage and a kick up its boring bonnet, we could have been presented with something bursting with fierce fun. Instead, we’re left watching an uninspired collection of scenes that will incite nothing but road rage.

Sadly, the predictability doesn’t end there and is also transferred to the bland, stereotypical set of characters. The husband Andrey is in the doghouse for cheating and the wife Olga is clutching at pills to get through the day. It’s an eye-rolling combination of cues that set-up a chain of events that are already threatening to bore you to death. Andrey is the ultimate jerk. He rants on to poor Olga about her trust issues while looking at nude pictures of another woman. He leaves his toddler in the car on her own. At night. In a garage. So he can talk to the other woman on the phone. He says “forgive me” about 1,000 times, although having no intention of changing his ways. Yes, we’re meant to hate him, so that when he gets his just deserts we scream, “HOORAY!”, but seriously? His clichéd character borderlines on being more hyper-real than believable and that’s problematic. Olga, also, is a poorly written woman who is painted as the damsel in distress, with no personality and only serves as the window for the supernatural. It’s an out-dated and dull representation of both characters, that drives this film further into a bottomless abyss of fruitless fatuity. 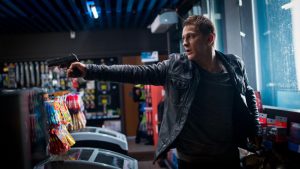 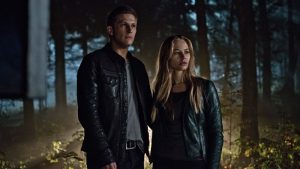 Paranormal Drive does attempt to throw in some surprises, despite them not having the desired effect. To give things a bit of a shake-up there are moments that, quite literally, serve no purpose. There is a scene where the family appear to be going round in circles as they meet the same block in the road a few times; it’s a promising shift into a different gear, that suggests events are taking a turn for the psychological. Bring it on! Unfortunately, the plot appears to forget this ever happened, because in the next scene they’re going happily on their way again. Did I miss something? There’s another scene where Andrey bumps into a couple of hunters who act super sinister for no reason; again, is this going to start settling into a more psychologically probing position now? Nope, that scene also means nothing. It’s a frustrating culmination of pointless events that lead nowhere and meet their spectacularly ludicrous end when the film reaches its twisty, nonsensical ending. Rather than be a twist in the typical sense, Paranormal Drive lies to its audience and plays it off as a twist. It’s a shocker. Just when you thought it can’t get any worse, it treats its audience to a poor, undeserving climax that will leave them feeling more cheated than Olga. Not cool.

Paranormal Drive brings absolutely nothing new to a genre that is already overflowing with terrible additions, proving that it takes more than just a good idea to create an effective horror film. A haunted car is a solid base for conjuring chills, but if you haven’t got a smart, surprising, script, a decent set of actors or an eye for delivering frights, your film is going to fail. Paranormal Drive is a failure.