Paranormal Activity: The Ghost Dimension Will Debut at Screamfest 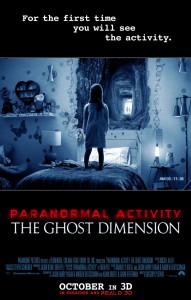 The finale of the Paranormal Activity franchise will take place at Screamfest, the place where it all began when the original Paranormal Activity was screened at the same festival in 2007. The festival runs from 13th October to 22nd October, with The Ghost Dimension screening on the final day in – hopefully – glorious 3D.

Director Oren Peli has said, “It’s incredibly exciting, and somewhat surreal, to premiere the final instalment of the Paranormal series at Screamfest where the first film premiered eight years ago,” said Peli “These films continued to be made because of the incredible fans that supported them from the very beginning, so I look forward to bringing the series back to its roots to honour them.”

They grow up so fast, don’t they? In this case, it actually feels as though Paranormal Activity has been around forever, it’s tricky to remember a time before Toby started wreaking supernatural havoc  on American families. Alas, we have been promised that The Ghost Dimension is to be the last film. There will be no more. This is it. Say goodbye.

Bid farewell to Paranormal Activity: The Ghost Dimension when it is released on 23rd October 2015.