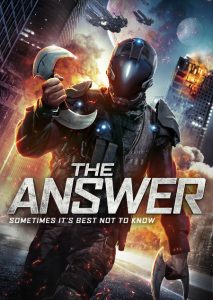 Billed in its press pack as “Saw meets The Fugutive”, foreboding sci-fi actioner The Answer premieres on US VOD next month, courtesy of High Octane Pictures. To get us geared up, they’ve released a new trailer, plus a bunch of stills.

Written and directed by Iqbal Ahmed, the film played a few festivals between 2015 and 2016, and has already made its entrance on UK DVD. It stars Austin Hébert (Jack Reacher: Never Go Back) as introverted young man Bridd who – after being attacked and left for dead – receives a package from his long-dead mother containing a strange device. Soon, Bridd and his girlfriend Charlotte (Mixology’s Alexis Carra) are being pursued by masked men, and Bridd is framed for murder. To clear Bridd’s name, the pair must use the device to follow clues left by Bridd’s dead parents to uncover their attackers’ shady plans, and to find out the truth about Bridd’s identity.