Paranoia Grips New The Ones Below Poster 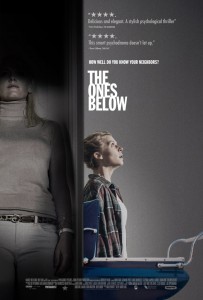 Magnolia Films have set a date for psycho-thriller The Ones Below, as well as giving us this stylish one-sheet. The film is set to hit selected US cinemas and VOD on May 27th.

Starring Clémence Poésy (In Bruges, TV’s The Tunnel) and The Walking Dead’s David Morrissey, The Ones Below is the feature directorial debut of David Farr, who scripted 2011 thriller Hanna. It tells the tale of a young couple and their seriously troublesome neighbours:
“A couple expecting their first child discover an unnerving difference between themselves and the couple living in the flat below them who are also having a baby.”

The Ones Below received a limited UK release in March through Icon.