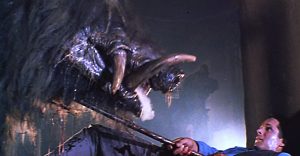 A long overdue restoration of one of the true highpoints of the ‘80s wave of Ozploitation is on its way courtesy of Umbrella Entertainment.

Directed by Russell Mulcahy, 1984’s Razorback is set in a remote town in the Outback, where a giant, killer boar is terrorizing the locals. It’s a colourful and wonderfully-shot film that breaks up its kinetic attack scenes with the kind of stillness and existentialist dread that permeates so much of Aussie genre cinema.

Melbourne’s Roar Digital completed the 4K scan and restoration of the film for the upcoming Blu-ray, and you can bet the film will look absolutely stunning. Equally exciting is that the fabled uncut version – not seen since the original Australian VHS and featuring numerous additional gore scenes – will make it in as a Blu-ray extra, as revealed on Cult of Monster, who reported: 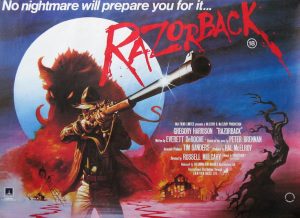 “Unfortunately the upcoming RAZORBACK Blu-ray release will not include the ‘grizzly’ extended shots/scenes featured on the old Aussie Roadshow Home Video VHS/Beta reinserted back into the film as those 35mm film elements are long lost however Umbrella will be including a standard definition VHS cut as a special feature!”

The Razorback Blu-ray is tentatively scheduled for a November 1st release.