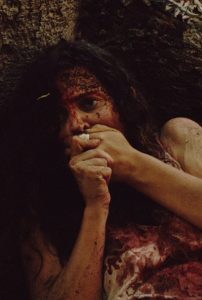 This intriguing teaser trailer has been shared by the official account of the frankly titled Incredible Violence, along with a couple of stills. The film comes from director G. Patrick Condon, who has a history of strong titles, with a few shorts under his belt with names like Infanticide! and Fuck or Fight.

Incredible Violence follows a low rent filmmaker who blows the investment lent to him by a shady organisation, and so makes his movie the only way he can think of. Locking his actors up inside a house, he plays the part of the killer in his slasher movie, picking the cast off one by one.

The teaser may be brief, but the film sure doesn’t look like anything we’ve seen recently. It actually reminded me of notorious, grotty grindhouse classic The Last House on Dead End Street, and that’s gotten me very interested indeed.