Synopsis:
In this follow-up to 2014’s Ouija, a woman and her two children face a terrifying evil when they start to use a Ouija board during their scam séances. 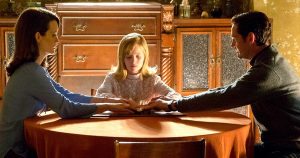 2014’s Ouija is a perfectly watchable horror film, but it lacked a punch that would render it memorable. It was your classic “teens get terrorised by the supernatural” tale with very few scares or surprises. It was fine, but it could have been great. Thankfully, director Mike Flanagan (Oculus, Hush) and writer Jeff Howard have created a marvellous follow-up with Ouija: Origin of Evil which breathes fresh life into the franchise and proves that a horror sequel can improve on its predecessor.

With Flanagan at the helm of Origin of Evil, I must admit that I had no doubts that this was going to be a treat and I was not disappointed. Ouija: Origin of Evil hits every nail on the head, crafting a film that bursts with uncanny frights, but holds the scares together with a seamless story of a grief and underprivileged family. Flanagan carefully crafts this emotive and captivating story – which is greatly carried by the film’s three leading ladies Elizabeth Reaser, Lulu Wilson and Annalise Basso – and dishes out a heap of well-executed frights to go alongside it. What we are then delivered is a highly entertaining, unpredictable and chilling feature that plays to clichés, but also bursts with creativity with its subversion of the expected.

The story is a simple and ordinary tale of a family terrorised by the paranormal, but Flanagan has a unique vision and manages to transform a predictable horror film into something a bit more unexpected. You will be lead into thinking that the story is going in one direction – for example, the introduction of a priest rings those Exorcist bells loud and clear and there is even a camera shot that replicates the famous scene of the exorcist standing outside Regan’s home. However, don’t be fooled into thinking that Origin of Evil is going to imitate anything else from The Exorcist, because it soon becomes clear that Flanagan and Howard have no intention of ripping off one of the greatest horror films of all time and, instead, desire to mould their own kind of possession feature. 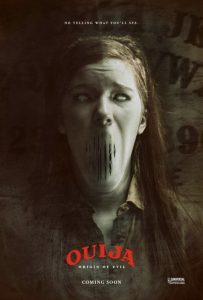 Certainly there are a host of clichés within this Ouija; as the young girl possessed Doris Zander – played remarkably by Lulu Wilson – contorts her body, hangs upside down on the ceiling and runs up the wall instead of taking the stairs. However, where many possession films use these devices cheaply and with no second thought, there is the feeling here that Flanagan is giving his audience a bit of a wink when he plays to these clichéd ways of frightening. Ouija: Origin of Evil ducks and weaves, picks and chooses what it wants to do and where it wants to go, carefully selecting the best ways to scare its audience and scare it does. There are a handful of moments that are subtly very freaky and I advise you to keep your eye on what little Doris is doing in the background.  The more obvious scares that show Doris rolling her eyes back to white and whispering menacingly in to the ears of those she gets her hands on are enough to alarm even the most hard-core of horror fans.

Ouija: Origin of Evil’s 1960s period setting allows the film to further deviate from the first and, also, steer away from overused tropes revolving around mobile phones (there’s no signal!) and the montage of scrolling the internet endlessly for answers. Origin of Evil chooses to focus on the family space and the conflicts that arise between the members when Doris starts experiencing something “amazing” or, you know, pretty freaking nightmarish. If we abandon the horror elements of the film we’re left with a familial drama, Doris’ bullying combined with the death of her father, forces her to seek solace in a Ouija board and the “friend” she meets on the other side. The girls’ mother Alice is suffering her own grief and is seduced by the supernatural in the hope that she’ll come into contact with her deceased husband, eventually using the séances as a way to make money for her family. The Ouija board becomes the heart of the home; representative of the family’s hope for a better life and a gateway into another. It is probably not an accident that the first Ouija incident involves the discovery of money buried in the walls, saving the family for eviction. The story’s sentimentality is never too extreme, but it is impossible to ignore Ouija: Origin of Evil’s more affectionate side. 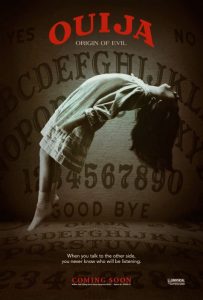 The initial introduction to the family where we see them carrying out their scam séances is a playful, knowing reconstruction of typical scares associated with Ouija boards and possession, working as a warning for the audience: what we are eventually going to get will be a million times scarier than a few candles blowing out. Despite the hilarity of it all, there is also something unmistakably eerie bubbling below the surface and the film becomes a ticking time bomb for when the real scares explode. The frights in Origin of Evil are some of the most effective I’ve seen in a studio horror flick, so I can only hope that more big-budget horror films choose to follow in these frightful footsteps.

Ouija: Origin of Evil is the best and scariest horror sequel in years. It is an exquisitely directed and confident, creative feature that secures Mike Flanagan as one of the greatest horror directors of our time. Aided by a great cast and a stylish, spooky period setting, Ouija: Origin of Evil is a gem of a horror sequel. It is a must-see for those who like their horror films filled with sentimentality, serious scares and spine-chilling shocks.