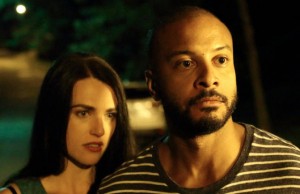 US channel Chiller premieres Slasher, its first original series, with a double-episode on Friday, March 4th. The 8-episode psycho-thriller airs on the Super Channel in Canada, where it was developed and produced by Shaftesbury in association with Super Channel and Chiller. The series is written and created by Aaron Martin (Killjoys, Being Erica) and directed by Craig David Wallace (Todd and the Book of Pure Evil). 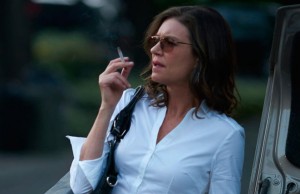 Official synopsis:
Slasher, an eight episode, one-hour psychological thriller series, stars Katie McGrath (Jurassic World, Dracula) as Sarah Bennett, a young woman who returns to the small town where she was born, only to find herself the centerpiece in a series of horrifying copycat murders based on the widely known, grisly killings of her parents. As the murders escalate, long-buried secrets are revealed, making everyone around her a suspect…or a victim. Sarah finds herself questioning everything and everyone around her, including her husband Dylan (Brandon Jay McLaren), her grandmother Brenda Merritt (Wendy Crewson), family friend Cam Henry (Steve Byers) and the town’s police chief, Iain Vaughn (Dean McDermott).

“With Slasher, I wanted to tell a modern-day monster story – but instead of a mythological creature, the monster in our series is all too human,” Aaron Martin says on Shaftesbury’s website. “The series is a fusion of some of my favourite thriller genres – the classic slasher film, the contemporary murder mystery and the timeless works of my favourite crime writer, Agatha Christie.”

Julie Di Cresce, Director of Canadian Programming for Super Channel says: “Fans of the slasher genre and horror fans in general, are going to love what this original series has to offer.”