Synopsis:
A young opera singer named Betty takes the lead in an avant-garde production of Macbeth. During several performances, a sadistic killer stalks her. He tapes pins under her eyelids so she can’t blink, and forces her to watch him kill. 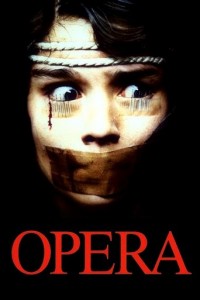 In recent years, the quality of Dario Argento’s filmography has declined. There’s no denying that the maestro has made some of the greatest horror and giallo pictures of all time. However, he seems to have tried to adapt to the changing horror landscape. The baroque imagery, and his eye for detail, seems almost non-existent in his most recent efforts. It seems his 1987 film Opera was his swan song with making a quality product. More importantly, it’s the quintessential case of ‘art imitating life.’

Opera marked Argento returning to giallo, after the release of 1985’s Phenomena. What we got was an artist not only returning to his roots, but also making one of the most visually striking films of his career. Not since Suspiria and Tenebrae had the director’s vision been more focused. In a lot of ways, this work combines his Hitchcock-esque camerawork, along with the suspense of a Mario Bava film.

The story also has a setting we might not expect from a typical giallo. Argento sets his story in the lurid world of the opera, an art form firmly engrained in Italian culture. In some of his earlier works, we’re thrown into the underbelly of Rome. The chic lifestyle takes a backseat to dark alleyways, perverted killers, and unsavory characters. Here, we’re thrown into a production of Verdi’s Macbeth. Macbeth itself is considered a ‘cursed play’ by many actors, who even refuse to utter its name during rehearsal. The stigma of the old superstition carries itself into the film, as we see everything fall around our protagonist. In some ways, the director of this production even seems to be a caricature of Argento himself. A tyrant on set described as a sadist by reputation. It’s been well documented that Argento isn’t fond of actors. For him, it’s the image.

Our protagonist in Opera is Betty, a young opera singer thrust into the lead role. In this film, she takes place of the vulnerable heroine, as well as the perennial victim. Forced into a role she doesn’t want, in a production she soon doesn’t want to be a part of. She becomes the target of an obsessed stalker, kidnapping her and forcing her to watch his sadistic killing spree. In a lot of ways, Betty’s torment serves as a mirror image to the viewing audience. This also establishes a theme of control, one you’ll find dominant throughout the film.

One of the themes you’ll find in some of Argento’s earlier films is voyeurism. Here, we’re introduced to new kind of voyeurism; one that’s forced and you can’t look away from. With pins taped beneath Betty’s eyes, she can’t blink; her only option is to watch the carnage unfold in front of her. As the audience, we have the option to look away if we’re too squeamish. This whole angle is almost an insult from the director to the typical theatregoer.

One thing your ears will notice is how diverse the soundtrack is. Claudio Simonetti of Goblin returns for a portion of it, but we’re also treated to a great deal more. The music is an algorithm comprising the original opera by Verdi, heavy metal tracks from Steel Grave and Norden Light, and even a song from Madame Butterfly. The music falls into place with the film almost perfectly, merging classical and the modern. This all goes along with the setting for film, as well as feelings of paranoia and dread that accompany it. Aside from all of that, this film is paced extraordinary well. Argento once again demonstrated his gift for giving nothing away, and not revealing anything until the films third and final act. Watch this once; the ending will surprise you. If you watch it again, you might pick up on a few things you missed the first time.

This film marked an end of an era. This is the high watermark of Dario Argento, he’s never been able to recapture the magic that graces his earlier works. Although this was the definitive finale, it ended on a high note.