This One Floats Too: Clowntergeist Hits VOD in September

Last year’s widespread reports of knobheads wandering around dressed as clowns and the building excitement for Andrés Muschietti It adaptation have both no doubt contributed to this year’s wave of low-budget clown-based horror flicks. One of the more effective-looking is Clowntergeist, which is billing itself as – you guessed it – “Poltergeist meets IT!” High Octane Pictures just announced that they will release the micro-budget horror on VOD on September 12th. 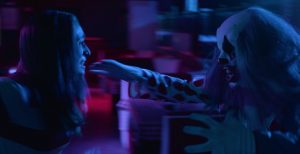 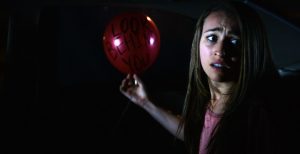 Synopsis:
Emma, a college student with a crippling fear of clowns, must come face to face with her worst fear when an evil spirit in the body of a clown is summoned terrorising the town she calls home. One by one Emma and her friends receive a balloon with the exact time and date of when it will appear to kill them written on it. After receiving her balloon, Emma realises that she has two days left to live, and must fight against the clock to find a way to survive.

Check out this Clowntergeist trailer, which features as many red balloons as any of the It trailers, and a couple of cool scares too.