ONE CUT OF THE DEAD: Film Revew 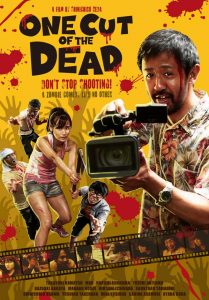 Synopsis:
A demanding director and his actors and crew are attacked by zombies while filming a low-budget zombie movie. Or are they?

It’s difficult to talk about One Cut of the Dead (aka Kamera o Tomeru na!) without spoiling its ingenious plot, so let’s keep this brief. Made on a miniscule budget of ¥3 million (or about $25,000 in American currency), this Japanese zombie comedy is one of the funniest films you’ll see all year.

Written and directed by Shin’ichirô Ueda and starring Takayuki Hamatsu, Yuzuki Akiyama, Harumi Shuhama, and Kazuaki Nagaya, the film opens like any other cheap zombie movie, complete with George Romero-style grey corpse makeup and poor decisions from its characters. Pull back, and we learn this is actually a film set, and the demanding director (Hamatsu) isn’t happy. After making his lead actress cry, he storms off, and the actors and crew bond while discussing the creepy legend surrounding their shoot’s location. But when the director returns, it becomes obvious that he’s willing to go to any lengths to get a good performance out of his cast. Even if it kills them.

The first act of One Cut of the Dead is utterly charming, and if the film had ended there, audiences would not have been disappointed. But it’s where the film goes from there that really sets this one apart from the horde of zombie-themed movies vying for our attention.

The second act is the weak link; while interesting, it’s unable to match the fun of the acts that surround it. But stick with it, because it’s building up to a side-splitting final act that delivers punchlines to jokes you didn’t even realise were being set up. Try to watch it in a crowd if you can, because listening to the audience lose it around you only elevates the experience. 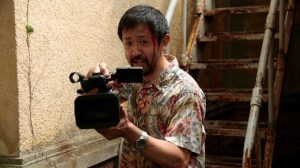 A clever, low-budget love letter to clever, low-budget filmmaking, One Cut of the Dead is simply brilliant. Be sure to stay for the credits, which provide an endearing parallel to the third act and pay tribute to all the hard work that went into the film. The poster calls this “a zombie comedy like no other,” and for once, such a claim is spot on.