Wasteland Passages, from OlyMoon Productions, is available to read online now! The stories take place in the universe of The Brooding Muse and has its own horror fantasy style while intertwining with the events of OlyMoon’s flagship series. Taking inspiration from Tales of the Crypt, The Savage Sword of Conan, and classic black-and-white horror magazines, Wasteland Passages is a captivating horror series with a style and feel all its own.

The first story was written by Jack Slattery and illustrated by J. C. Grande and is available to read now at broodingmuse.com. Each of Wasteland Passage’s chapters will take place in the same timeline and universe as The Brooding Muse comic and will feature new, original tales that help to expand upon the hostile, unforgiving world that fans have come to know. 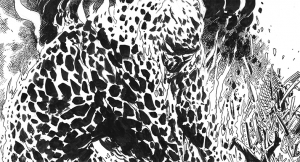 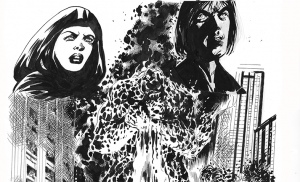 The Brooding Muse is a horror web-comic that follows Kayla, Floating Fangs, and The Raven—three vigilante anti-heroes who are part of a last-ditch mission in a dangerous and forgotten world. Wasteland Passages will interact and intersect with The Brooding Muse as the ever-continuing tale of this hostile world full of killers moves forward.

New pages are added to the comic every Monday and Thursday, and a Patreon is in the works to produce pages and feature new artists and writers to aid in producing future issues. Read Wasteland Passages now and stay tuned to broodingmuse.com for more updates!