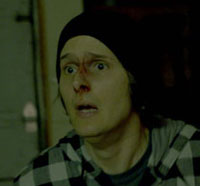 Synopsis:
Sheep Skin is a gritty, realistic take on the werewolf sub-genre. The film centers around a group of friends in a punk rock band that kidnap a businessman because they believe he is responsible for their friend’s death. However, the friends have convinced themselves that the man is more than just responsible for the demise of their friend and is actually a werewolf hiding in plain sight. The group members take the man to a nearby warehouse, where they intend to prove that he is in fact a werewolf and take it upon themselves to try to stop him.