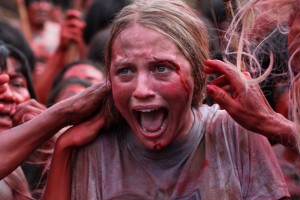 The first trailer for Eli Roth’s upcoming cannibal horror THE GREEN INFERNO has just appeared online and you can watch it below. The Green Inferno is based around a group of well-meaning college students who travel to the Amazon to try and protect an endangered tribe from an evil corporation looking to push them off their land.  However, when their plane crashes, the students soon realise that the tribe they’ve come to protect has a certain affinity for human flesh.

Eli Roth directed the film from a script he wrote with Nicolas Lopez and Guillermo Amodeo.  The film stars Aaron Burns, Ariel Levy, Sky Ferreira, and Lorenza Izzo.  It’ll hit theatres in the US on September 5th.