Official Teaser Trailer For Massacre Is A Real Bloodbath 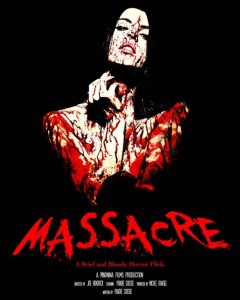 We think you guys are going to be excited about Deathaus’ latest film as it has some of the best women, musicians and men of theatrical goodness. The teaser trailer for Massacre is definitely looking like a film to get excited about.

Synopsis:
Marianne suddenly awakens to find herself in a gory and blood-soaked mess of a scene, with butchered bodies surrounding her. The worst part is, she can’t even remember how she got there or what atrocity went down to cause this.