As we await further news on the Nicolas Winding Refn-produced Maniac Cop remake, Shawn Crahan’s violent, pulpy Officer Downe will be protecting, serving and ass-kicking on VOD platforms on November 18th through Magnolia’s Magnet Releasing. You can meet the mean bastard with this strikingly retro new poster. 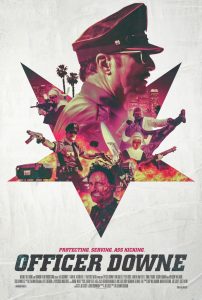 Best known as Slipknot’s Clown, Crahan adapted the story from the 2010 graphic novel by Joe Casey and Chris Burnham, and word is he’s put all of the comic’s excess and ultraviolence right there on the screen.

Officer Down takes you into a hyper-real Los Angeles for the story of a savage LA policeman who is repeatedly resurrected and returned to active duty via dark science technology. When a rookie officer named Gable is recruited as back up, he discovers there’s much more to the titular super-cop than a mindless law enforcement drone warring against a twisted rouges gallery of over-the-top super-villains.

Sons of Anarchy’s Kim Coates stars as the badass titular cop, who is resurrected each time he dies, which happens to be quite frequently. Appearing alongside Coates are Sam Witwer (The Mist), Lauren Luna Vélez (Dexter), Meadow Williams (Can’t Come Out to Play) and Tyler Ross (V/H/S 2) as Officer Gable.