Officer Downe is a Maniac Cop in New Stills 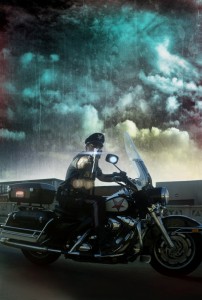 Few would make the case for Shawn Crahan (aka The Clown) being the most musically gifted member of Slipknot, but word is that he has put his talents to good use directing his feature debut, Officer Downe. The cartoonishly ultraviolent actioner premiered last Friday at the Los Angeles Film Festival, and we’ve got a few stills for you.

Sons of Anarchy’s Kim Coates stars as the titular cop, who is resurrected each time he dies. And he dies a lot. The film is based on the 2010 comic by Joe Casey and Chris Burnham, and looks to be bringing all of the pages’ insanity and excess to the screen.

Officer Down takes you into a hyper-real Los Angeles for the story of a savage LA policeman who is repeatedly resurrected and returned to active duty via dark science technology. When a rookie officer named Gable is recruited as back up, he discovers there’s much more to the titular super-cop than a mindless law enforcement drone warring against a twisted rouges gallery of over-the-top super-villains. 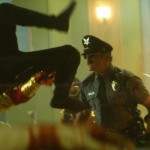 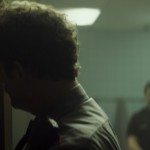 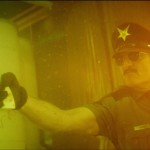