The Nun Goes Into Production

It was only a week or so after The Conjuring 2’s release last June that New Line announced their plans to fast-track a spinoff centring on the film’s habit-wearing antagonist. The Conjuring 2 co-writer David Leslie Johnson was swiftly hired to pen the script, with director James Wan and producer Peter Safran on producing duties. Nine months and a change in writers later, and The Nun has now officially begun filming.

The Hallow director Corin Hardy (who boarded the project when it had become clear that his The Crow reboot wasn’t happening anytime soon) made the announcement through Twitter, posting this picture on Monday along with the words: “And so it begins…” 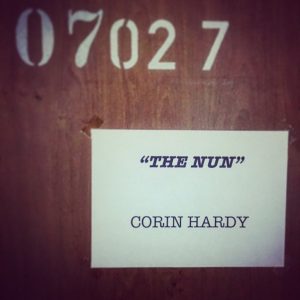 The script from which Hardy is working was not (for reasons unknown) written by Johnson but by Wan and Gary Dauberman, the latter of whom wrote The Conjuring spinoff Annabelle and its upcoming sequel, not to mention Andy Muschietti’s hotly-anticipated adaptation of Stephen King’s It. Plot details are being kept tightly under wraps for the moment.