No More Clowning Around in the Poster for Cleaver 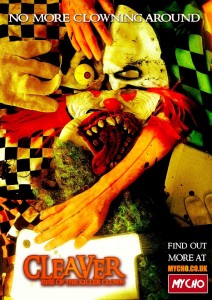 A new poster for Cleaver: Rise of the Killer Clown has been unleashed online and it’s a bit of a beauty. The tagline is great, with “No More Clowning Around” implying that Cleaver will not be messing around and will not hold back; hopefully, that means it will be offering full-blown, bloody, violent, clown craziness. This could be wishful thinking, but here’s to hoping!

Cleaver will be coming from director MJ Dixon and if you’ve seen his 2012 film Slasher House, you’ll be familiar with the clown who is the face of the film and Andrew M. Greenwood, who is returning to reprise his role. An IndieGoGo campaign for the film managed to exceed its £1,500 target within a month, so the film already has a clear fan base behind it.

Synopsis:
1990 Oklahoma : Carlton Layton arrived home to find his wife in the arms of another man, he went out to his van and donned the clown suit that he used as a children’s entertainer and proceeded to slaughter his wife and her lover. All of this was witnessed by his 5 year old daughter and Carlton escaped into the night leaving his little girl behind.

5 Years Later : Halloween Night and Carley, a young college student, is hired to take care of a little girl as her parents head out to a Halloween party, but someone one is waiting, someone wants the girl, someone who we know as ‘The Cleaver”.

Take a look at the eye-catching poster below and Cleaver will be released on DVD in the UK on 31st October, Happy Halloween!