Ninjas and Crims Face The VelociPastor in Grindhouse-Inspired Trailer

Here’s an odd ‘un for you. A trailer just showed up for The VelociPastor, which sees a priest develop the ability to transform into a dinosaur which, naturally, he uses to hunt down and eat criminals. As he sets about his Mesozoic vigilantism however, he must also fend off a mysterious ninja who pursues him. Obviously.

The film is the work of writer-director Brendan Steere, who adapted it from his own 2011 faux-Grindhouse trailer, which started life as a school project before going viral. It stars Gregory James Cohan, Alyssa Kempinski, Daniel Steere, Yang Jiechang, Jesse Turits, Fernando Pacheco de Castro and Aurelio Voltaire.

Steere reportedly gave the film its rough, aged look by dragging the unprocessed film across the floor of his bathroom and baking it in an oven. Going by the aesthetic on display in this trailer, he did a good job, and the film looks like a ton of fun to me. 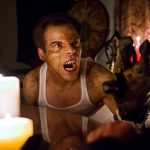 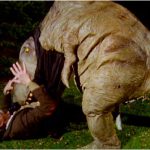 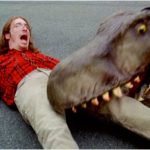 Rest assured, we’ll be keeping an eye out for more on this one.