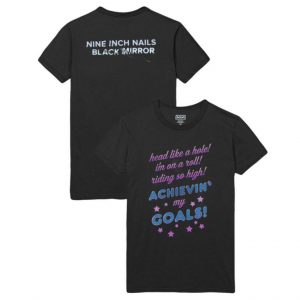 Black Mirror’s fifth season dropped on Netflix this week, and Nine Inch Nails fans might have noticed some strangely familiar lyrics in the episode “Rachel, Jack and Ashley Too.”

In the episode, Miley Cyrus stars as pop star Ashley O and covers the NIN song “Head Like a Hole.” Reportedly, Trent Reznor gave Charlie Brooker his blessing to rework the lyrics for the show. And to commemorate the occasion, NIN have released an amusing collaborative t-shirt that features Ashley O’s inspirational alternative chorus to the industrial-rock classic: “Head like a hole! I’m on a roll! Riding so high! Achievin’ my goals!”

The shirts are available to preorder on NIN’s website.