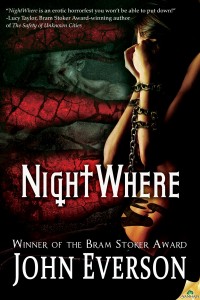 The main players in the novel are interesting, but some of those on the periphery are not. I was never quite convinced with Mark’s motivation to risk so much to save his wife, who was clearly beyond saving and pretty awful. I would have said good riddance to her, but I suppose that would have made for a short book. Mark’s character could have done with some more inner dialogue and thought over his situation, rather than blindly following the mantra, she’s my wife, must save her. My favorite character was Sin D, the bartender. She was vivacious and a hoot. Selena, the voice of reason and support for Mark, was also well written. As threatening as the people of NightWhere keep saying they are, Mark has a pretty easy ride, coming back and causing trouble at the club repeatedly. That is, until his climactic trials. The horror is all based on gore rather than scares and it’s effective at what it tries to do. After a while you do get somewhat desensitised to it as you read on and it loses some of the impact.

The conclusion is satisfying and there is room for a follow-up. Overall, I’d recommend giving this a read. Not for the prudish or squeamish, but I suppose if you were either of those you wouldn’t be here.