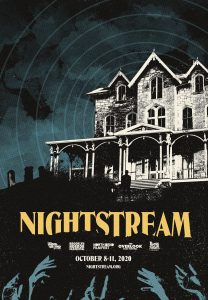 With in-person film festivals likely out of the question for the foreseeable future, five of the U.S.’s most beloved genre festivals—Boston Underground, Brooklyn Horror, North Bend, Overlook, and Popcorn Frights—have joined forces to form Nightstream, a collaborative virtual festival. The full program has just been unveiled, and it’s crammed full of as many horror premieres and genre icons as you’d expect from a five-in-one festival experience!

One of the events we’re most excited about is a virtual fireside chat with Nia DaCosta, director of the upcoming Candyman. With the film’s release delayed until 2021, we’re eager to hear as many details about the spiritual sequel as we can get!

Other hair-raising events on the calendar include a 20th-anniversary celebration of American Psycho with director Mary Harron, a “Horror Camp!” panel hosted by legendary drag performer Peaches Christ, and a panel on literary horror featuring authors Nathan Ballingrud, Tananarive Due, Paul Tremblay, and Sarah Read. Attendees are also cordially invited to a virtual dinner with festival honoree Mick Garris and fellow masters of horror Joe Dante, Ernest Dickerson, Axelle Carolyn, Mike Flanagan, Tom Holland, John Landis, William Malone, and Tommy McLoughlin (plus some additional surprises!). And in between all the frights, there’ll be cocktails, musical performances, and even a special edition of Final Exam Trivia, the weekly horror quiz hosted by Ted Geoghegan and Michael Gingold that has gotten this writer through a lot of lonely nights in lockdown.

That’s just a fraction of the horror in store, with the program also offering up a smorgasbord of short films, retro screenings, and more. While film screenings will only be accessible to viewers in the U.S., non-film events can be watched worldwide. All proceeds from the festival will go directly to the filmmakers and artists taking part, charitable causes and struggling small businesses in each of the festival’s home cities, and to the festivals themselves to help them recoup expenses from canceled physical events.

Nightstream will run from October 8th through 11th, with films available to view on the Eventive platform until the 14th. To view the full line-up or purchase badges, visit Nightstream.org.