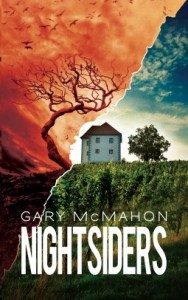 Nightsiders by British author Gary McMahon is set in the Lake District where I’ve holidayed many times, intriguing and certainly grabbed my attention immediately.

The Mitchell family bought a house in the Lakes and then went on holiday with the intention of fully moving in on their return, it’s a new start for the family and an escape from the city and a heart breaking tragedy.

They arrive at their new house only to find another family and an intimidating one at that, is already living there. Who the hell are the Corbeaus and why are they seemingly intent on destroying Robert Mitchell and his planned peaceful hideaway.

The author takes a remarkably normal situation and family, then turns it completely around and puts a genuinely scary spin on it. For reasons unknown the Corbeau family, who are seemingly no strangers to violence and this exact same situation, don’t just want the house, they want to bring everything crashing down on the Mitchell’s. The most chilling thought was how easy it is to put yourself in the Mitchell’s shoes and the terror that follows.