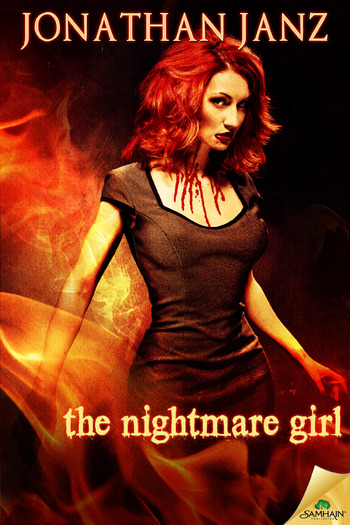 Joe Crawford and his family have no idea what they are in for when they decide to be Good Samaritans and intervene upon witnessing a young mother abusing her child at a gas station.

Things only escalate when the baby is taken into foster care and the child’s psychotic mother and grandmother start stalking and terrorizing Joe. The mother then takes an oil can, dumps it over her head, lights a match and takes her own life while burning her house down.

Joe and his family quickly learn that the family they are dealing with are actually part of a larger cult whose beliefs are based on ancient forms of voodoo, Satanism and a worship of fire, blood and sacrificial means. Joe puts his and his families lives on the line as he battles the cult members who are out for his blood in the hopes of saving the young abused boy from their evil ways.

In NIGHTMARE GIRL, Janz builds the novel beautifully to a truly climactic and nail biting ending but not without some insanely terrifying scenes first including one in which the lead characters are in a bloody and nightmarish stand off with cult members in their place of worship, in the pitch black. This scene alone will stay with me for a long while.

Janz brings true terror to the pages of NIGHTMARE GIRL with scenes that will make your skin crawl but also with a nice sampling of dark humor, sarcasm and a beautiful story of family.

NIGHTMARE GIRL is the latest in an already impressive stack of novels from this beginning writer and it proves that Jonathan Janz is one of horror’s great new writers.