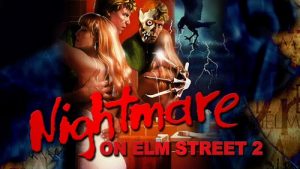 Synopsis:
Freddy, the razor gloved killer, who attacks in dreamer’s nightmares, returns to Elm Street to kill as many teens as possible. There’s only one problem; in the original ending Nancy Thompson trapped him in the dreamscape, and now Freddy intends to break out of that world by possessing the body of teenage boy, Jesse Walsh, in what has to be the most homo-erotic horrors of all time.

This Elm Street movie has to be the strangest of them all. For a start off, it ignores Freddy’s rule that he kills in people’s nightmares and, in this one, the seventies and eighties much used ‘possession’ theme is exploited. Also, on another note, the entire film seems like a coming out story for the main character, Jesse (Mark Patton), as he continues to run away from his sexually available girlfriend, and into the arms of his friend/bully, Grady (Robert Rusler).

This is far from a bad film and, actually because of the strong and unusual gay theme running throughout the film, we have a very unique story in the horror genre.

Jesse Walsh, with his younger sister and parents, have moved into Nancy Thompson’s old house, the girl who vanquished Freddy at the end of the original classic. Soon, Jesse is having horrific nightmares involving Freddy, and this is affecting his home, social, and school life. There’s also a theme running through the dreams of everything being too hot, and melting. The beginning nightmare with the school bus teetering on a rock above the mouth of hell is particularly creepy and memorable.

Then, we have some very odd sequences from Director Jack Sholder, such as an exploding parakeet. Jesse has already made friends with Lisa (Kim Myers) and she gives him a ride to school each day, as well as being his love interest. She’s very coy with her love, and it’s not surprising really that Jesse bonds with the school jock, Grady (Robert Rusler) – who de-pants him in gym class for everyone to see his bare butt. They then have a fight where Jesse just tries to rip Grady’s top off. They’re then punished and made to do press ups after school. Then, the gay gym teacher tells them to “hit the showers.” Afterwards, Lisa comes around to help Jesse tidy the bedroom as he still hasn’t unpacked. Now, I think this is the first and last time I’ve ever seen a guy doing a dance routine in a horror movie. But, here it is. Pop music blaring, singing, gyrating on the bed and closing a drawer with his butt. It’s all just a bit strange. So, anyway, Lisa arrives just to see Jesse on the bed in all his embarrassment.

They then tidy the bedroom and out of Jesse’s closet they find Nancy Thompson’s diary. With a board-game sticking out of the closet (in frame) named ‘probe,’ for some reason. They read about Nancy’s awful nightmares, and the name Freddy rings a bell with Jesse. That night, Jesse dreams about going to a gay bar with guys dressed in S&M gear, his gym teacher soon turns up and tells him to “Hit the showers.” The dream then turns to the school gym, where Freddy turns up and ties the gym teacher with skipping ropes to the showers, before whipping him, ripping his trousers off, and slashing his back open – killing him. Jesse then realizes it’s him wearing Freddy’s glove and wakes up screaming. He actually screams a lot in the film, and his acting is very good – I mean, who wouldn’t scream if Freddy showed up, ripped off his skull to reveal his pulsating brains before saying “You’ve got the body, I’ve got the brain.”

Lisa, for some strange reason thinks it’d be a good idea to throw a pool party. Jesse is invited and they soon start making out in the pool house, but he runs away after his tongue becomes grey and demonic, leaving poor Lisa to just wonder why? He then runs to Grady’s house (Who’s half naked, in a pair of short-shorts) and tells him he has to sleep at his house that night. After a speech from Grady about Lisa wanting to get into Jesse’s pants, he says “…And you wanna sleep with me!” Jesse’s response, “…I don’t know.” They both fall asleep and Freddy then starts to grotesquely rip himself out of Jesse’s body. Grady gets killed by Krueger – who impales him on his bedroom door. Then at the pool party (breaking every rule set by ‘A Nightmare on Elm Street’ and the sequels) Freddy comes into reality and starts killing the teens randomly before disappearing.

Jesse goes back to Lisa covered in blood and telling her that “He’s trying to get inside me.” “He wants my body.” The sub-text is just TOO much, it’s kind of funny how the first time I watched this movie, my friends and I had no clue this was all about Jesse coming out.

So then we see a dog with a human head (for no apparent reason) and Jesse and Lisa go to the boiler room where Fred Krueger used to take his kids. And, in a moment which should be from a werewolf or vampire movie, Lisa confesses her undying love to save Jesse’s soul from Krueger’s grasp.

This film has its moments which are creepy, but Freddy isn’t really in this movie all that much. For some scenes another actor was used (for example in the shower scene) because producer Bob Shaye didn’t want to pay Robert Englund the wages he so rightly deserved for creating Krueger, and thought just any guy could do it. Any guy couldn’t. Just from the guy’s walk into the shower scene, it’s true, no-one can play Krueger like Englund. When he does appear, obviously, he’s very frightening.

Freddy does utter one of his most iconic lines in this movie “You are all my children now!” Robert Englund, as usual, does the most with his lines and shines when he’s on screen. Kim Myers and Mark Patton are likeable as actors and the characters they portray, although Jesse can come across as whiney. Robert Rusler is memorable as Grady as well, and the teenage characters are all likeable again in this sequel. 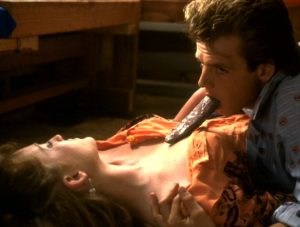 The film is very eighties, with exploding birds, dance routines, and cheesy dialogue. The seriousness of the original ebbs away very quickly in this sequel. Since when was Fred Krueger interested in killing gym teachers? I thought he wanted the Elm Street kids? Luckily things get back on track with the next sequel, where they brought Wes Craven and actress Heather Langenkamp (Nancy) back with a bunch of talented actors, including Patricia Arquette.

This film would’ve been forgettable if not for the very strong gay sub-text running throughout. This film is easily one of the weakest Elm Street movies, and it adds nothing to the franchise or storyline that runs throughout the films.