Synopsis:
Since her mother’s incarceration in a mental institution, Boarding School Student Janet (Jennie Linden) suffers from debilitating nightmares. The dreams intensify to the point where school carer Mary (Brenda Burke) decides to place Janet back in the custody of her legal guardian Henry Baxter (David Knight). But, after returning home, Janet’s nightmares get worse and coincide with the arrival of a ghostly apparition. 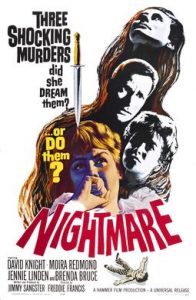 After the success of Psycho in 1960, Hammer Film, partly capitalised on the success of Hitchcock’s classic and produced some reality based psychological thrillers of a similar ilk (The Maniac, The Nanny, Fanatic). During this period, writer Jimmy Sangster (Dracula) and director Freddie Francis crafted some stellar (and not so stellar) pseudo homages to Psycho, both separately and together, which included films like Hysteria and The Psychopath (written by Robert Bloch). Following their excellent Oliver Reed starring Paranoiac in 1963, Sangster and Francis reunited for Nightmare. This tense, psycho thriller is a lesser known but reputable Hammer, despite not being a classic and unlike the studio’s more celebrated, Gothic features. As well as being inspired by Psycho, Nightmare also evokes H.G Clouzot’s Les Diaboliques, with its conspiring characters’ madness/ paranoia, school setting, family fracas’ and foreboding tone, while retaining the supernatural air of subtly sinister chillers like The Haunting and The Innocents. 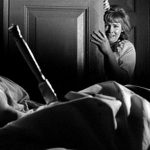 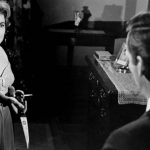 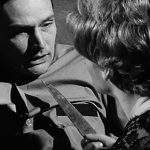 Jennie Linden (a last minute replacement for Julie Christie who left to star in Billy Liar) is spectacular as the rationally fractured Janet. Linden conjures and discharges outbursts so extreme they tinker on histrionic but never seem fallacious. Her madness is mined with utter conviction, smacks of despair and instils terror in the viewer, along with more subdued lunacy spats via sporadic blubbing and blithering. These contribute to Nightmare being a cut above most of Hammer Horror’s similar psycho thrillers that surfaced in Psycho’s wake, in terms of performance and execution, but the film is far from a classic. Sangster’s script is stunted by a skew whiff structure. The plot is often repetitive and the central concept is far from unique,  feeling too much like a fusion of the films that inspired it. Its story streams like a string of scenes featuring Janet dithering about dimly lit corridors which, while unnerving, ultimately take us nowhere.

A slow burning second act leads to a mid-point plot twist which spins the script into a new direction as a second set of protagonists (ala Psycho) are introduced. While both halves work they are not melded well enough to flow succinctly on screen. Several other supporting characters enter the rumpus, which sees Janet’s guardian, Henry Baxter, take centre stage as his relationship with another character suggest a conspiracy could be afoot. Grounded dramas unfurl, “supernatural” elements are discarded and orchestral overkill attempts to govern frights instead of suspense and terror mined by the cast and narrative. Overall, Nightmare’s drama works well but the story is thin, fragmented and not very well structured, yet lots of scary moments involving shadows, silhouettes and slow turning door handles combine to infuse a potent menace. Darkness occupies a lot of the screen, as do child-like sniggers and fleeting glances of a woman in a white gown and while Francis’ film isn’t one of Hammer’s greatest, it is an honourable thriller that shouldn’t be left in the shadows. 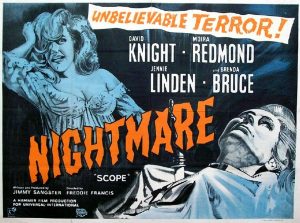 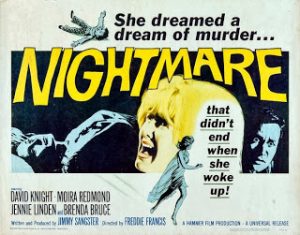 Blu-ray Extras include: “Nightmare in the Making”: a fantastic 26 minute, info stacked documentary about Hammer Horror, its lesser known productions and the new direction the studio took following the success of Hitchcock’s Psycho. The doc also contains clips from an archive interview with Jennie Linden. “Jennie Linden – Memories” is the longer/full length version of this interview, conducted by actress Portia Booroff, who talks to Jennie about her life and career. “Inside Hammer’s Nightmare” is a shorter but excellent documentary in which a group of journalists, cultural historians and Hammer enthusiasts discuss Nightmare in relation to Hammer’s other films of the time and its embellishment of the “Gaslight” style. The disc also features a stills gallery of images.