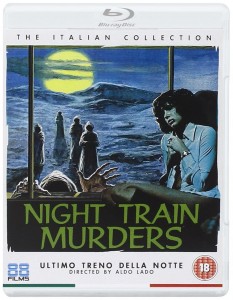 Synopsis:
Two young women are travelling by train to spend Christmas at one of their parent’s house.  They never make it to their destination. They are instead terrorized, humiliated, abused, sexually molested and eventually killed by two thugs and a mysterious seemingly well to do older woman. The criminals think they have gotten away with it until they find themselves at the parent’s house and find mercy is in very short supply…

If this sounds at all similar to a little Wes Craven film from 1977 called Last House on the Left, you would be bang on the money. Night Train Murders is essentially the Italian Last House. Much like its inspiration, Night Train Murders (also known as Late Night Trains and Last Stop on the Night Train) also got caught up in the Video Nasties scare of the early 1980s. Luckily (or unluckily, from a notoriety perspective) Night Train Murders was never successfully prosecuted under the Obscene Publications Act, while Last House on the Left was. Which is somewhat surprising (and just proves how ridiculous the criteria for prosecution was) as both films are just as grim, unsettling and just plain nasty as each other.  I don’t mean that as a criticism (or as a slight to the Last House purists out there!) as a film with such a subject matter should be unpleasant and difficult to watch at times, it doesn’t make it any less of a good, even dare I say entertaining, well-made film.

Directed by Aldo Lado, Night Train Murders takes a while to build up steam, and then starts rattling along at a fair old pace (no more terrible train puns, I promise!). For the first third of the film we are introduced to our various sets of characters. The two eventual victims, Lisa (Laura D’Angelo) and Margaret (Irene Miracle) are both likeable, realistic teenage girls. They smoke and talk about boys and are first flattered when Curly and Blackie (Gianfranco De Grassi and Flavio Bucci) turn their attention on them. Curly and Blackie have jumped onto the train sans tickets after assaulting and robbing a man dressed as Santa Claus. While not as instantly recognisable as psychopaths like David Hess’ crew from Last House they still carry a distinct air of menace and nihilism. This is something The Lady On The Train (Macha Meril) has plenty of time for. She is wealthy and high class and politely discusses social issues with fellow passengers. Meanwhile, Lisa’s parents (Enrico Maria Salerno and Marina Berti) look forward to seeing their daughter while preparing for Christmas festivities. A slow burn opening like this makes the middle section of the film, when one after another of terrible abuses are rapidly heaped on the poor girls, more shocking, especially with the jolly Christmas scenes at the parent’s house.

Lado uses the setting he has chosen wisely. On the first train, the claustrophobic nature is well felt by how crowed the narrow corridors are, and the constant jolting of the train unsettles the characters, and the audience, especially when the nature of The Lady, Curly and Blackie starts to become clear. When a bomb threat forces the Lisa and Margaret to switch trains, the juxtaposition between the first and second trains is startling. The second train is dark and quiet and has an aura of danger about it. The scenes where the villains torment the girls in their carriage are brutal, and while undeniably sleazy in content the execution is very well done. There isn’t a great deal of gore, but the anguish on the girl’s faces, the arousal on the tormentor’s faces, and the direction make this part of the film truly stand out. Although I couldn’t supress a wry smile when Blackie protests at raping one of the girls because she is a virgin. After everything he’s done to these girls, that’s his line in the sand? Once the girls are dead, the unhinged trio steal their tickets and disembark at the station where the parents are fruitlessly waiting to pick the girls up. The Lady injures her leg and Lisa’s father, a doctor, offers to take her to their house to patch her up. After that it turns in the waiting game as to when the parents will realise that their houseguests are the killers. It was a necklace in Last House, in this it’s a truly hideous tie (really, the tie is probably the most offensive thing about the whole film). The parent’s revenge isn’t as grisly as Last House, or as peppered with Home Alone style booby traps, but it still mostly satisfying to see them get theirs. I say mostly because one of them does survive, a rarity in the rape/revenge genre. Overall, this is a well-made and well executed little piece of Italian exploitation sleaze. It’s well directed, well-acted and throws a bit of social commentary in there for good measure. It’s not as shocking or as visually disturbing as Last House on the Left, and is also completely derivative of it. But if people can separate and judge Last House and Virgin Spring separately, it seems churlish not to attempt do the same with this film. Don’t let the shouts of ‘Rip off!’ put you off. For fans of video nasties and 70’s Italian horror, this definitely worth watching.

Released on Bluray-ray by 88 Films as part of their The Italian Collection (this film being number one in said collection) it is presented in HD with perfect picture and sound, with the option to watch the film in Italian with subtitles should you wish. There aren’t many extras (some trailers and interviews with Irene Miracle) but the reversible sleeve and collectable art card are always good editions. Much like Arrow’s continuing series of lovingly crafted DVDs and Blu-rays, 88 have plenty to offer fans of the sleazy, the sordid and the downright weird.