Night of the Living Dead’s George Kosana Dead at 81

The news broke on Monday of the passing of George Kosana, who was best known for playing Sheriff McClelland in George Romero’s seminal horror Night of the Living Dead. The actor had been dealing with a variety of illnesses including emphysema, COPD, and macular degeneration. He was 81 when he passed.

Kosana’s death was announced by his friend and NOTLD co-writer John Russo, who posted on Facebook:
“My close friend George Kosana, who played the sheriff in NOTLD, has regrettably passed away after a long battle with various illnesses. He will be greatly missed by me, by his fellow NOTLD cast and crew members and by his many fans. For the past few days, I have been constantly reliving my many good and often funny remembrances of him.” 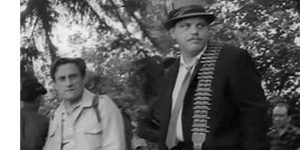 Kosana – who also acted as production manager on NOTLD – would work with Romero again on the legendary director’s 1971 comedy There’s Always Vanilla, and also appeared in sex comedy The Booby Hatch and 2009’s Incest Death Squad. He reprised his role as Sheriff McClelland in 2012’s Living Dead, and again in My Uncle John is a Zombie!, which was co-directed by Russo. The latter should emerge sometime this year.

Our condolences and good thoughts go to Kosana’s family and loved ones.