Night of the Living Dead Gets 50th Anniversary Blu-ray Release 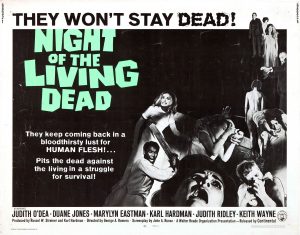 It has already been announced that Night of the Living Dead will be receiving a 4k restoration later this year, so hardcore fans in the USA can catch that at the New York Film Forum on 13th October before a national rollout. We imagine that seeing the film on the big screen will be an awe-inspiring experience, so we’re disappointed to hear of no plans for a 4K screening in our neck of the woods.

Check out the original trailer from the 1968 film below. What’s it called again?

Mill Creek’s 2K blu-ray will be a new transfer and will feature the film in its original 1.37:1 aspect ratio. Be sure to grab yourself a copy from 3rd October.