THE NIGHT OF THE HUNTER: Film Review

Synopsis:
A serial killer masquerading as a preacher marries a lonely widower whose children hide a stolen fortune. They must keep their secret safe, and escape the wrath of their new evil stepfather. 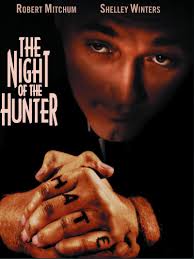 In 1955, British actor Charles Laughton stepped behind the camera for the first and only time in his career. In his directorial debut he took an American crime novel, blended the cinematic techniques of the German Expressionist movement, and created one of the screen’s most memorable villains. The result was The Night Of The Hunter; a film that even decades after its release still manages to awe, terrify, and inspire.

Based on the novel of the same name by Davis Grubb, this work transports us to a time period long forgotten. Like so many other memorable entries in the genre, this one has its roots based in reality. Real life serial killer Harry Powers (aka the ‘lonely hearts’ killer) served as the inspiration for Grubbs’ novel.

Throughout the 1950s, the horror film was still an evolving art form. Tales of space invaders and aliens dominated the screen, and Saturday matinees were full to the brim with eager children anticipating their fix of candy and cheap scares. Such fare existed as a tongue-in-cheek form of entertainment, and an escape from the growing paranoia of the ongoing cold war.

With those being the typical tropes and themes of the time period, it’s no surprise this wasn’t a breakout hit upon its release. Over the years however, this film has gained the praise it deserves. Deservedly so, many films have been released since then, but few have the timeless qualities this one possesses. It’s a product of its time, and a classic for all time. 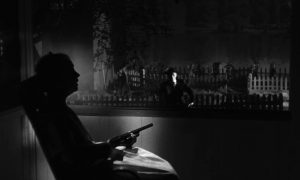 Our story focuses on a serial killer masquerading as preacher named Harry Powell, played by the late Robert Mitchum. Truth be told, Harry Powell is one of, if not the greatest villain to emerge on the silver screen. He’s the quintessential ‘wolf in sheep’s clothing.’ He’s cold blooded, manipulative, and charismatic. One moment he’s a pious man of God, the next he’s a cunning sociopath. He weaves a web of deception on almost everyone he comes into contact with, with very few seeing his true nature and intentions. I would even go so far as to say this is the most terrifying performance from an actor.

Mitchum’s iconic performance aside, the visual aesthetic gives this film its dark tone. It emphasises the contrast between light and shadow (Chiaroscuro) previously seen in films such as The Cabinet Of Dr. Caligari and Nosferatu. Giving the American south an expressionist makeover gives this film an almost nightmarish quality about it. Powell himself even takes on an inhuman form at times. This is his character arc: as the film progresses, he becomes more degenerated by his evil nature. Powell loses the ability to hide behind the veil, and reveals his true darkness. If this were a fairy tale, his transformation into a monster would be complete.

This is film explores the duality of good and evil. It stands the test of time, and will continue to do so for many decades to come.