Synopsis:
Three grocery delivery employees are put through their paces when they are tormented by a demonic entity during a night delivery.

The Night Delivery is an extremely creepy and practical effects-laden film that embraces its short runtime to deliver a horror film filled with frights and delights. It certainly doesn’t hang around and there’s the overt feeling that this could have been a much longer story. That’s certainly not a bad thing, because I’d be keen to see more from the unlucky trio who, honestly, get what they deserve.

We’re given no detailed back story about the three guys, but we do know that they’re up to no good. think Don’t Breathe, but without the blind guy. In his place, is a man possessed by a demonic entity who likes to smear intruders with tomato sauce. It’d be funny if it wasn’t so creepy.

It’s a familiar concept to see a group discover that an opportune moment to commit a crime is anything but. However, The Night Delivery’s air of mystery and courageous commitment to being evasive and vague, but consistently chilling, breathes refreshing life into an idea that we would otherwise be accustomed to. The lack of a detailed explanation becomes the film’s charm, allowing us to enjoy the ride with no real idea where we’re going or where we’ve come from. The visuals do the talking and they’re filled with typical, but effective, shots of looming fog, vague blood-written messages that promise doom and shots of the characters looking startled.

Perhaps the one aspect of the film that lets down the otherwise suitable spookiness, is the cast. They’re amateurs and that os to be expected with a short film, but it’s difficult to not be bothered by average acting when it is not on par with the film’s bold execution and gutsy scares. 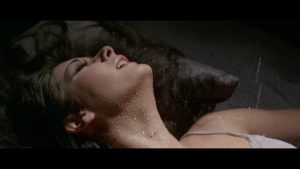 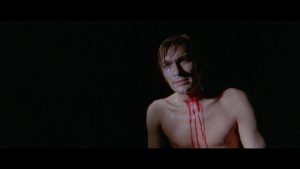 The supernatural frights are accompanied by a suitably ’80s score that harks back to the classic scores of A Nightmare on Elm Street and Halloween. Together with the grisly practical effects, the synthy score works well to embrace a retro vibe that appears to be such an important part of modern horror film-making. Although this inspiration is nothing new and something that is frequented in horror feature films, short films and TV series, it works well here in paying homage to the days where practical effects ruled the roost.

The Night Delivery is great little short film that uses its 15-minutes well to heighten tension, deliver frights and never outstay its welcome. As a feature film it would probably not hold up as well, because the story does lack a decent amount of creativity. But, it’s a thrilling 15 minutes and I enjoyed the hell out of it.