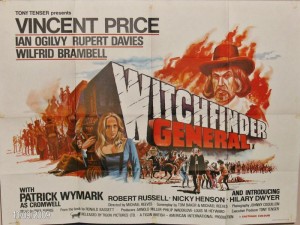 Following closely the news of the upcoming Nicolas Winding Refn-produced Maniac Cop remake comes word that the director has his sights on another reimagining of a celebrated classic, albeit one from the other end of the horror spectrum.

Winding Refn has just announced that he will produce a remake of sublimely bleak British chiller Witchfinder General, which starred Vincent Price as self-appointed warrior of the Lord, Matthew Hopkins. Released in 1968, Witchfinder General was directed by the late Michael Reeves, and tells the grim tale of Hopkins, who travels around 17th Century Britain offering his services as a finder and executioner of witches. His sinister trade serves only to line his pockets and gain sexual favour however, and he soon finds himself hunted down by a soldier after persecuting his father-in-law to be.

Currently gearing up for the release of his own The Neon Demon, Winding Refn will be keeping himself busy with these remakes, and it will be interesting to see what he announces next. This week he introduced a screening of Mario Bava’s Planet of The Vampires at Cannes, and expressed a real love for the director, so perhaps he’ll set his sights on one of the Italian master’s films.