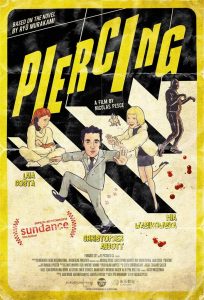 Eyes of My Mother director Nicolas Pesce is sticking with horror with his next feature Piercing. The film has received positive reviews on its festival run where it has screened at FrightFest in London, Mayhem in Nottingham and Fantasia in Canada. Now we can look forward to the film getting a home release this December.

Piercing stars Mia Wasikowska as a call girl who interrupts a married man’s plan to murder a prostitute. The film is based on the 1994 novel written by Ryu Murakami. He is also the author of Audition; the infamous and shocking story that was adapted by Takashi Miike in 1999.

Along with Wasikowska, Piercing stars Christopher Abbott, Laiai Costa, Maria Dizza, Wendell Pierce and Martin Ireland. Be sure to catch Piercing when it is released on 7th December 2018.