Nicolas Cage Must Pay The Ghost in New Trailer 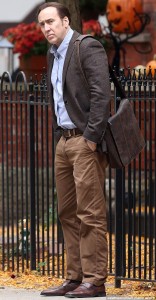 If Nicolas Cage is attached to a film, you know you’re going to get something special. Pay The Ghost is a thriller directed by Uli Edel, which sees Cage’s worst fears come to life when his son vanishes on Halloween. In true Cage style, there’s a bigger conspiracy at hand and he is intent on discovering the truth behind his child’s disappearance. The moral of the film’s story is obviously, if your son asks if you can “pay the ghost?” you say, “no, you bloody well can not.”

Synopsis:
One year after his young son disappeared during a Halloween carnival, Mike Cole (Nicolas Cage) is haunted by eerie images and terrifying messages he can’t explain. Together with his estranged wife (Sarah Wayne Callies), he will stop at nothing to unravel the mystery and find their son—and, in doing so, he unearths a legend that refuses to remain buried in the past.

The trailer gives us a good look at the supernatural elements of the film and there’s some classic horror imagery in there; from a woman being dragged up a wall to unexplainable images on a video camera. Visually, Pay the Ghost has a great other-worldly look about it, with a clear contrast between the spookier, more fantastical scenes and those that are rooted in reality. It’s a nice touch.

Be sure to catch Pay The Ghost when it is released on 23rd September in the USA and 23rd October in the UK.