We reported last week that Blumhouse and Universal Pictures are bringing Michael Myers and Laurie Strode back for two more films, Halloween Kills and Halloween Ends, which are intended to draw the pair’s bloody saga to a close. Jamie Lee Curtis was confirmed to be reprising the role of Laurie, but we didn’t know until now whether Nick Castle, the OG Michael Myers, would be involved in the film at all. 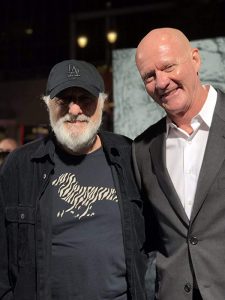 To our delight, Castle confirmed on Twitter that he will indeed be donning the iconic mask yet again, writing: “You can’t kill the boogeyman. Just heard the news. I’m coming back.”

After playing Michael in John Carpenter’s original Halloween back in 1978, Castle cameoed as the mute killer in David Gordon Green’s sequel of the same name last year. For the rest of the movie, Michael was played by James Jude Courtney. Castle confirmed on Twitter that Courtney will be back, too. They join returning director Gordon Green and a slew of other cast and crew members from the 2018 film.

Halloween Ends and Halloween Kills will stalk theatres on October 16, 2020 and October 15, 2021 respectively.