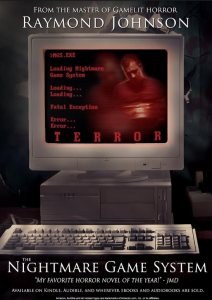 For the first time since the Choose Your Own Adventure books of the early eighties, A new literary genre has taken the publishing world by storm. Dubbed LitRPG or GameLit, it combines fantasy or sci-fi elements with gaming mechanics, usually presented in the form of stat tables. Author Raymond Johnson has taken this a step further, blending it with a genre that’s closer to our hearts than his antagonist’s machete.

“I’ve been a fan of horror since I was a kid. I was weened on Godzilla and the Universal Monsters films. For me, it was a melding of my two loves.”

His latest novel, NGS: The Nightmare Game System, blends the two genres seamlessly. The book follows the adventures of Ramzan, a career thief who gets in over his head when he steals from the wrong people in an attempt to save his sister. But the Chechnyan Mafia have eschewed more conventional forms of torture for something more sinister: A full-immersion virtual-reality simulation designed to break the minds of whomever has the misfortune of logging in.

Ramzan must battle through a constant barrage of psychological torments, spearheaded by Blair, a psychopathic, chain smoking AI who could put Pinhead to shame on his best days. He must face wave after wave of enemies, some familiar, some not so much. Hordes of zombies, werewolves, slime monsters and more try to tear him down. All the while, in the background, the true nightmare lies in wait: a masked, machete-wielding killer—Kane.

Johnson’s love of horror shines through on every page, paying tribute to some of his earliest influences.

“George Romero and John Carpenter are both lifelong favourites of mine. Dawn of the Dead, Creepshow, The Thing—loved them.” They were masters of the macabre, and experts at creating that sense of dread, that fear of the unknown that pours out of the pages of this book. In a virtual setting, anything is possible, from all-consuming acidic slime monsters to deluges of hypodermic needles, creating a sense of dread not felt since the Early Nightmare on Elm Street films. 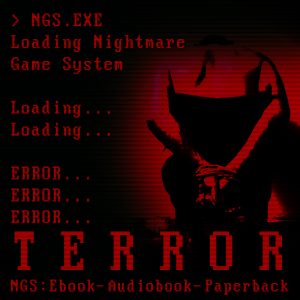 Blend in role-playing game elements, and you have a book like no other. LitRPG, also known as Gamelit (the distinction usually depends upon the amount of stats presented in the book), has taken off in recent years, with hundreds of thousands of followers worldwide. Raymond Johnson fell in love with the genre early, devouring the bibliographies of genre kingpins like Dakota Krout and Dave Willmarth.

His particular affinity lies with audiobooks, and he is the host of the long-running LitRPG Audiobook Podcast, available on YouTube and most audio streaming services. You can pick up The Nightmare Game System in e-book, audiobook or paperback at the link below.