The New UK Trailer for Antibirth is Gross and Trippy

We’ve been sent the new trailer for Danny Perez’s natal nightmare Antibirth and it’s gross, nauseating and extremely trippy. The film follows a woman named Lou who wakes up from a drug-fuelled night in a daze, unable to remember what’s happened the night before. One thing is for certain: she’s pregnant, but as the trailer shows, this is no normal pregnancy. 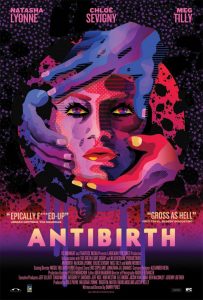 Synopsis:
In a desolate community full of drug-addled Marines and rumours of kidnapping, a wild-eyed stoner named Lou wakes up after a wild night of partying with symptoms of a strange illness and recurring visions as she struggles to get a grip on reality while stories of conspiracy spread.

The trailer is a blur of confusing visuals and strange imagery that works as a reflection of Lou’s fractured mental state. As a combination of gross-out body horror and comedy, Antibirth looks like it has hit the nail on the head. Check out the zany and mind-boggling trailer below, but we advise you to look away if you’re expecting…

Antibirth stars Natasha Lyonne, Chloe Sevigny and Meg Lilly. The film will be released on Digital platforms on Monday 27th March and DVD on 10th April 2017.