Hitting UK shores in a couple of weeks is Liam Gavin’s A Dark Song, a film inspired by the occultist activities of the infamous Aleister Crowley. To get you hungry, the first UK quad poster has just been unveiled. 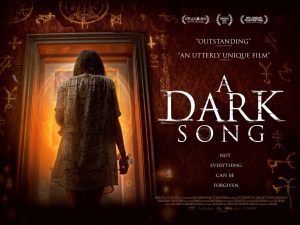 The moody shocker marks the feature debut for Gavin, who has been making genre shorts for some fifteen years. The film stars Dark Touch’s Catherine Walker as a grieving mother who contacts an emotionally-damaged occultist (played by Sightseers’ Steve Oram) in the hopes of communicating with her dead son. Read on for the full synopsis:
Sophia is grief-stricken and overwhelmed with sadness since the untimely death of her son. In a desperate attempt to achieve some form of closure, she reaches out to Solomon, an occultist with experience in an ancient invocation ritual that Sophia believes will allow her to make contact with her deceased child.

Locked away in a remote country house, the pair undergo a long and arduous ritual, risking both their mental and physical safety as they attempt to access a world beyond their understanding. But when Solomon finds out that Sophia has not been truthful about her wish, a greater danger threatens them. In the dark, they find that they are no longer alone in the house. They are now in the world of real angels, and real demons.