The Windmill is a slasher set in Amsterdam that follows a group of people at an abandoned windmill – surprise, surprise! – when their tour bus breaks down. They are forced to group together when a terrifying killer starts to knock them off one by one. 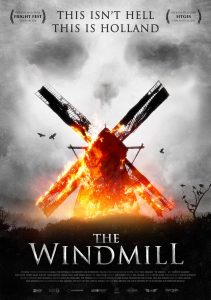 The concept is a classic, familiar one but there is a lot of originality in The Windmill that deserves to be praised. It’s blend of supernatural and slasher tropes makes for a visually impressive watch and sets the film above many throwback ’80s slasher flicks. We had a lot of fun with it when we caught it a couple of months ago; you can check out our review here.

The Windmill has a great cast that features Noah Taylor, Patrick Baladi, Charlotte Beaumont, Ben Batt and Adam Thomas Wright. It comes from director Nick Jongerius, who has made a very promising feature-length directorial debut.

Check out the trailer below and be sure to catch The Windmill when it is released on VOD and iTunes on 25th October. It will also get a limited theatrical release on 28th October, so will make for perfect big-screen Halloween scares.