New Trailer for The Punisher is Badass, Confirms Release Date 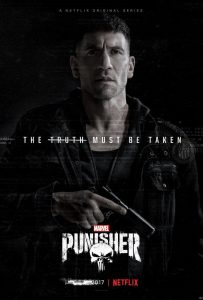 A new trailer has been unleashed for Netflix’s Marvel series The Punisher and it looks just as badass as the previous. Set once again to the heavy sound of Metallica, the new trailer shows Frank Castle (Jon Bernthal) exacting a fiery revenge on those that wronged him. In the series, Castle uncovers a conspiracy that goes beyond his own family, drawing him into a criminal underworld that he is determined to put a bloody end to.

It looks violent, aggressive and damn near perfect. We can’t wait for the series to finally be unleashed – Netflix has confirmed that the full 13 episodes will be made available on 17th November, so set aside any Justice League plans, because this is going to be epic. Clear you diaries; this is the next show that earns being binged.