Trailer For The Latest Japanese Horror Film Ju-on: The Final 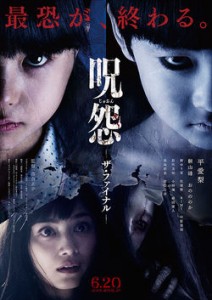 One of the scariest ghost stories to come from Japan has been the tale of a cursed house, born out of rage-induced murders, leaving vengeful ghosts that make disturbing cat noises to terrorise anyone that enters the house. This story is the general plot for Ju-on, and the franchise is about to be broken with the final installment and we have the trailer.

You might be more familiar with the American title, The Grudge, as they remade the film and it starred Sarah Michelle Gellar (Buffy the Vampire Slayer), but the original Japanese version is also entitled Ju-on: The Grudge. What you may not know is that Ju-on: The Grudge is actually the fourth film in the franchise, and the latest will be the tenth installment from director Takashi Shimizu.

Ju-on: The Final will be released in theatres in Japan this June 20th, and we will keep you updated on when there will be a domestic release.

Synopsis:
Following on from the terrifying events that happened in Ju-on: The Beginning of the End, we follow the older sister of teacher Yui Shono who disappeared after visiting the home of a truant student. As the sister delves deeper, she begins to realise that some curses should be left alone.