This New Trailer for Creepy is Just That

An appropriately creepy trailer has arrived for the Japanese thriller Creepy from director Kiyoshi Kurosawa (Pulse, Loft, Seventh Code), based on the novel of the same name by author Yutaka Maekawa.

There are some beautiful camera shots in there and a gorgeous location. Coupled with the eerie atmosphere that is laced with mystery and dread, it makes for a sumptuous and visually impressive taste of the film. 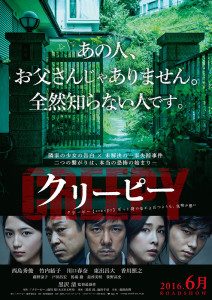 Takakura (Hidetoshi Nishijima) is a former detective. He receives a request from his ex-colleague, Nogami (Masahiro Higashide), to examine a missing family case that occurred 6 years earlier. Takakura follows Saki’s (Kawaguchi) memory. She is the only surviving family member from the case.

Meanwhile, Takakura and his wife Yasuko (Yuko Takeuchi) recently moved into a new home. Their neighbor, Nishino (Teruyuki Kagawa), has a sick wife and a young teen daughter. One day, the daughter, Mio, jumps into Takakura’s house and tells him that the man is not her father and she doesn’t know him at all.

Creepy will be released in the UK and Ireland on 25th November 2016.