Despite already being released in the USA, a new poster has surfaced for The Strangers: Prey at Night, the anticipated and long-awaited sequel to 2008’s invasion slasher The Strangers. It reminds me slightly of the poster for The Dark Knight, but that could just be me. 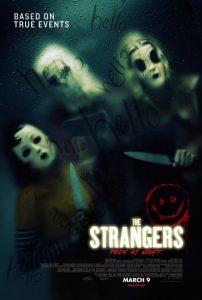 The film was released in the USA on 9th March and has received so-so reviews, with many people being generally disappointed after waiting so long for the film to finally be released. Alas, here in the UK, I’m still intrigued to see the film, so can’t wait for it to head over here on 20th April.

The Strangers: Prey at Night stars Christina Hendricks, Bailee Madison, Lewis Pullman, Martin Henderson, Emma Bellomy, Lea Enslin and Damian Maffei. The Other Side of the Door and 47 Metres Down director, Johannes Roberts, is in the director’s chair.